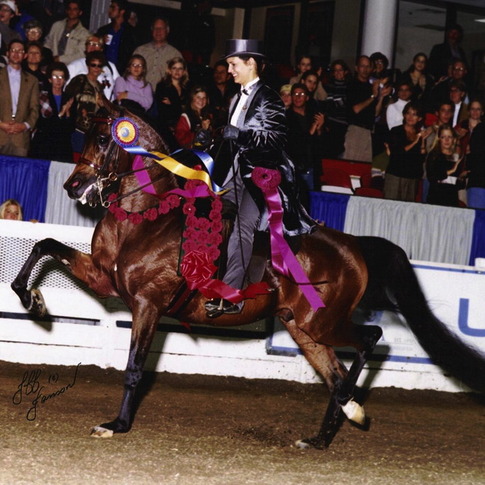 One of the greatest Arabian Park horses of our time, Apollopalooza has gone to greener pastures. At just ten years of age, his loss is great for the horse show world, Arabian horse breeders and particularly for his owners, Esprit Arabians, Bill and Carolyn Moller, and his trainers, Shawn and Carmelle Rooker. A handsome bay son of Reserve National Champion AA Apollo Bey and the MHR Nobility daughter, Magical Witch, Apollopalooza won his first national award in 1998 as a three-year-old and has been a national champion every year since 1999. It was expected that Apollopalooza would be a majorcompetitor in the Park class at the 2005 U.S. National Championships, but it was not to be.
During a routine training session at Rooker’s on September 26 th, “Palooza” took a wrong step in the long lines and broke his right hind leg. Rushed to the Michigan State University Veterinary Clinic in a makeshift splint, Apollopalooza waited patiently while a decision was made to attempt surgery. On Tuesday the 27th, Apollopalooza was in surgery for four hours while veterinarians removed a large bone chip from his leg and placed a metal plate along his hock and cannon bone. One of the attending veterinarians, Dr. Frank Nickels, said that Apollopalooza was a “…a model patient,” so personable and good humored that “…you would never know anything was wrong with him!”
The prognosis was good for Apollopalooza. It was anticipated that he would return to Rooker’s Training Stable and lead a normal, productive life as a breeding sire. Already the sire of over 150 purebred and half-Arabian offspring, Apollopalooza’s first foals are now six and among their ranks are several national winners, as well as numerous Class A and Regional Champions. As expected, the majority show talent in the English divisions, emulating their famous sire, Apollopalooza, and grandsire, AA Apollo Bey.
Apollopalooza was doing well with his recovery at Rookers, until December 15 th when he became very lame and was rushed back to Michigan State. It was discovered that the top three pins holding his metal plate in place had sheared. Why this happened is a mystery. It could have been the amount of pressure the horse was putting on his hind leg, or the fact that the pins were simply not adequate for the job. Apollopalooza had to undergo a repeat of the first surgery. It went well and he recovered but two days later he foundered on the opposite hind leg. For a few days the Rookers held on, trying everything imaginable to keep the pain under control. On the morning of December 20 th, the difficult and heartbreaking decision was made to let him go. Carmelle said that Apollopalooza was simply too great a horse to allow him to suffer any longer.
“We have been so touched by all of the e-mails, flowers, phone calls and prayers from everyone in the industry,” Carmelle says. “We want to thank everyone for their kindness. We live in a small industry and we are so grateful for all of our friendships and support. We also want to thank Dr. Jim Rooker, our on-site veterinarian, Dr. Frank Nickels and Dr. John Stick of MSU for caring and for doing everything possible for ‘Palooza.’ We owe all of you more than we can ever repay.”
Just before Apollopalooza’s accident in September Shawn and Carmelle decided to buy a young, Apollopalooza son to keep as a possible, future replacement. A bay, 2004 colt, he charmed them with his many similarities to his famous sire. GSF Pure Fuzion is out of an Afire Bey V daughter, Primroza Afire (x Primroza by Bask Clasix). Linebred to *Bask he is naturally gifted and beautiful and has provided the Rookers with some small comfort in this sad moment.
Written by Christy Egan
For Carmelle and Shawn Rooker